Bank of Ayudhya Public Company Limited (“BAY”) was established on January 27, 1945 in Ayudhya Province, once a capital of the Thai Kingdom, and commenced operations on April 1, 1945, with initial registered capital of Baht 1 million. The Bank’s head office was initially based in Ayudhya but was moved to Bangkok, within the same year of the Bank’s establishment, at the corner of Ratchawong Road. In 1996, the Bank moved its headquarters to the present location at 1222 Rama III road, Bang Phongphang, Yan Nawa, Bangkok 10120.

The Bank’s Ordinary Shares have been listed on the Stock Exchange of Thailand since September 26, 1977 and registered as a public limited company in Thailand on September 28, 1993. The Bank raised its paid-up capital to Baht 10,000 million and Baht 28,704 million in June 1998 and August 2003 consecutively.

In 2006 the Bank formed a business partnership with GE Money. Relying on both parties strengths to act as a strong driving force for business excellence under the theme “Power of Partnership”, the Bank is making a major leap toward success and aspires to be a leading bank in Thailand providing financial services of world-class standard.

As of December 2007 , the Bank’s registered and paid up share capital was Baht 57,477 million following GE Capital International Holding Corporation’s investment of 2,000 million shares, and with additional of warrants conversion in the amount of 14.789 million units, on 8 January 2008 the bank has increased its registered and paid up share capital to Baht 57,625 million accordingly.

BAY is the fifth largest domestic commercial bank in term of deposits, total assets and the sixth largest in term of loans. As of September, 2007, the Bank had Baht 663,963 million in total assets and 8,417 employees. BAY provides a full range of banking services to both its corporate and individual customers through its head office and its 569 branch nationwide. In addition to its domestic branch network, the Bank has three overseas branches in Hong Kong , Lao P.D.R. and Cayman Islands .

BAY has always placed an importance on the development of products and services so as to provide greater convenience for customers. Financial services available are for example: 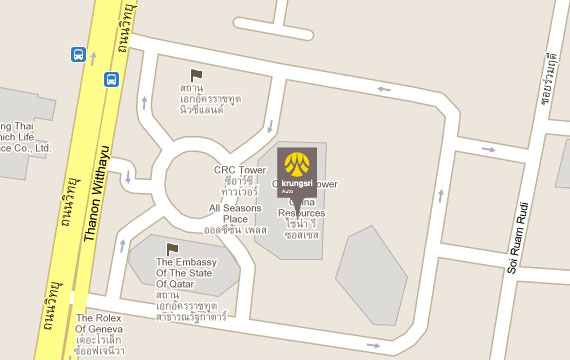