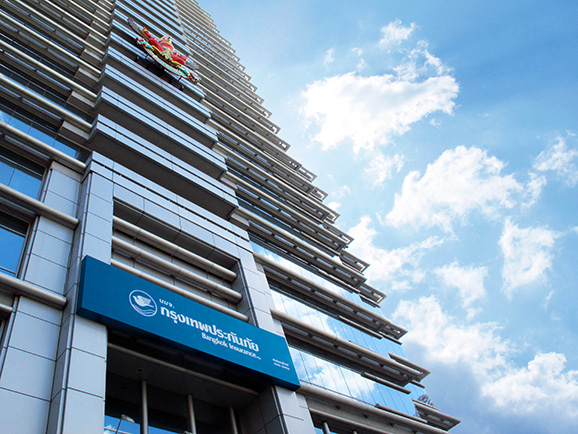 THE GREATEST HONOUR
His Majesty the King graciously bestowed the Royal Garuda Emblem upon Bangkok Insurance Public Company Limited on April 26, 2004, which was an auspicious occasion and the greatest honour for the Company, the management and the staff.
The Royal Garuda Emblem is equivalent to a certificate of assurance that the Company operates its business with honesty and integrity, is financially stable, and it trustworthy in its dealings with the general public. It also provides moral support to entrepreneurs and further enhances the prosperity and stability of business throughout the country
The Company has been arranging a request for the Royal Garuda Emblem since October 25, 1976, when Mr. Chin Sophonpanich was chairman. Now, it has been granted, the Company is recognized as being under His Majesty’s patronage. It is a great and precious honour, and the Company will always live up to the Royal Garuda Emblem’s worthiness and preserve its good reputation.
Company History
With paid up capital of 5 million baht, Bangkok Insurance PCL. was established on April 15, 1947 as Asia Insurance Co., Ltd. under the management led by Chin Sophonpanich. Its office was located on Anuwong Road, Samphantawong District, Bangkok.
Later in 1956, the Company was relocated to Asia Building on Suapa Road.
In 1964, the Company was renamed to Bangkok Insurance Company Limited.
In 1968, a new office was constructed on Silom Road.
In 1978, the company was listed on the Stock Exchange of Thailand. It was registered a public company in 1993 as Bangkok Insurance Public Company Limited.
With its readiness for a liberalized insurance market and determination to boost the business to better serve customers' needs, the company moved its office to the heart of the business district at Bangkok Insurance Building on Sathon Tai Road in 1999.
At present, the company has operated its business for more than 60 years, under the leadership of Mr. Chai Sophonpanich, Chairman and President, the executive and the staffs and increased its registered capital to 760.5 million baht.
Since the high competition in Non-life Insurance business, our Company has prove to be the leading company in Insurance business by achieving ISO 9002:1994 Certificate for Motor Vehicle Insurance in 1997 and for all classes in 2001. Where we are considered to be the First to receives such award both in Thailand and all over Asia. Once again, we have maintain or customer's trust and confidence by being awarded the ISO 9001:2000 Certificate in all classes of Non-Life Insurance in August 30th 2002 from Bureau Veritas Quality International (BVQI), under the authority of UKAS, the quality management institution.
For more than half a century, the company has adhered to the customer-oriented strategy, providing its clients with fair services and integrity. To further accommodate all clients, better meet their demands and strengthen mutual ties, the company embarked on an aggressive plan under an enhanced corporated vision by surveying the demands of its customers and developing new services. These efforts brought about the new organization structure that maximizes the provision of services based on 4 business channels, financial institutions, non-life insurance brokers, agent and direct customer, with an emphasis on convenience through a Single Point of Contact.
พันธกิจของบริษัท

Company statement
Vision
Bangkok Insurance aims to be the most preferred non-life insurer in Thailand
We will sustainably grow our business through:
- Financial Soundness
- Diversified Product Ranges
- Customer Centricity
With due emphasis on:
- Enterprise-Wide Risk Management
- People and Technology Capabilities
- High Standard of Corporate Governance and Social Responsibility
นโยบายทรัพยากรบุคคล