Formerly C.P. Convenience Store Company Limited, was established in 1988  by Charoen Pokphand Group to conduct the convenience  store business  in Thailand  under  the  “7-eleven” trademark.  The Company was granted a license to use the trademark from 7-eleven, Inc., USA. In 1989,

In 2007, the Company plans to establish another 400 - 450 new outlets both as stand-alone stores and store located in PTT gas stations to reach more target customer both in Bangkok, the vicinity and provincial areas.

The company aims to be the leader in convenience store business in Thailand that can satisfy the ever-changing demands of customer.  The Company will focus on its strength, offering “convenience” to customer in purchasing goods and service through 7-eleven outlets that expand across the country and most of which are open 24 hours a day

ดูวิดีโอและรูปภาพทั้งหมด
สวัสดิการ
ข้อมูลของบริษัท
In 1927, in Dallas, Texas, U.S.A., 7-Eleven was recognized for the first time as a retail store under the name of Southland Ice Company (later the Southland Corporation) which was established to produce and distribute ice. In the same year, Southland Ice expanded its business by bringing in consumer products, such as milk, bread and eggs to the store. Later the company renamed Tote'm store; this was the start of history of the convenience store.
Later, in 1946, Tote'm Store was renamed 7-Eleven with the aim to advertise the store's opening hours. In those days, 7-Eleven stores opened at 7 a.m. and closed at 11 p.m. every day. Since then, the business has developed so successfully that the stores are open 24 hours a day, setting it way ahead of its competitors.
Today, 7-Eleven has more than 24,000 stores around the world and has become a symbol of a high- standard convenience store providing excellent quality products and services which meet requirements of
customers in each community.

C.P. Seven Eleven's vision is the commitment to continual pursuit and fulfillment of customers' ever-changing requirements, current and in the future, with emphasis on convinence and service excellence through an
extensive and efficient network.

C.P. SEVEN ELEVEN PUBLIC CO., LTD. is the Thailand’s first 24-hour convenience store. With the vision of management team and good management approaches derived from 7-Eleven INC., the 7-Eleven has undergone a period of business growth and new branch expansion for over a decade and currently become a leading company in Asia.


A total of more than 8,000 employees today are offered good fringe benefits by C.P. SEVEN ELEVEN PUBLIC CO., LTD., their new, warm and steadily growing family. They are offered training courses and learning opportunities consistently for their professional and more efficient customer services. The company is waiting for you to come join our professional team and grow together with us. 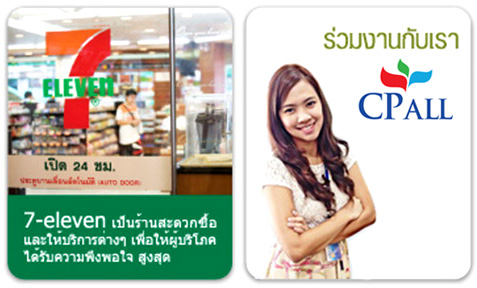